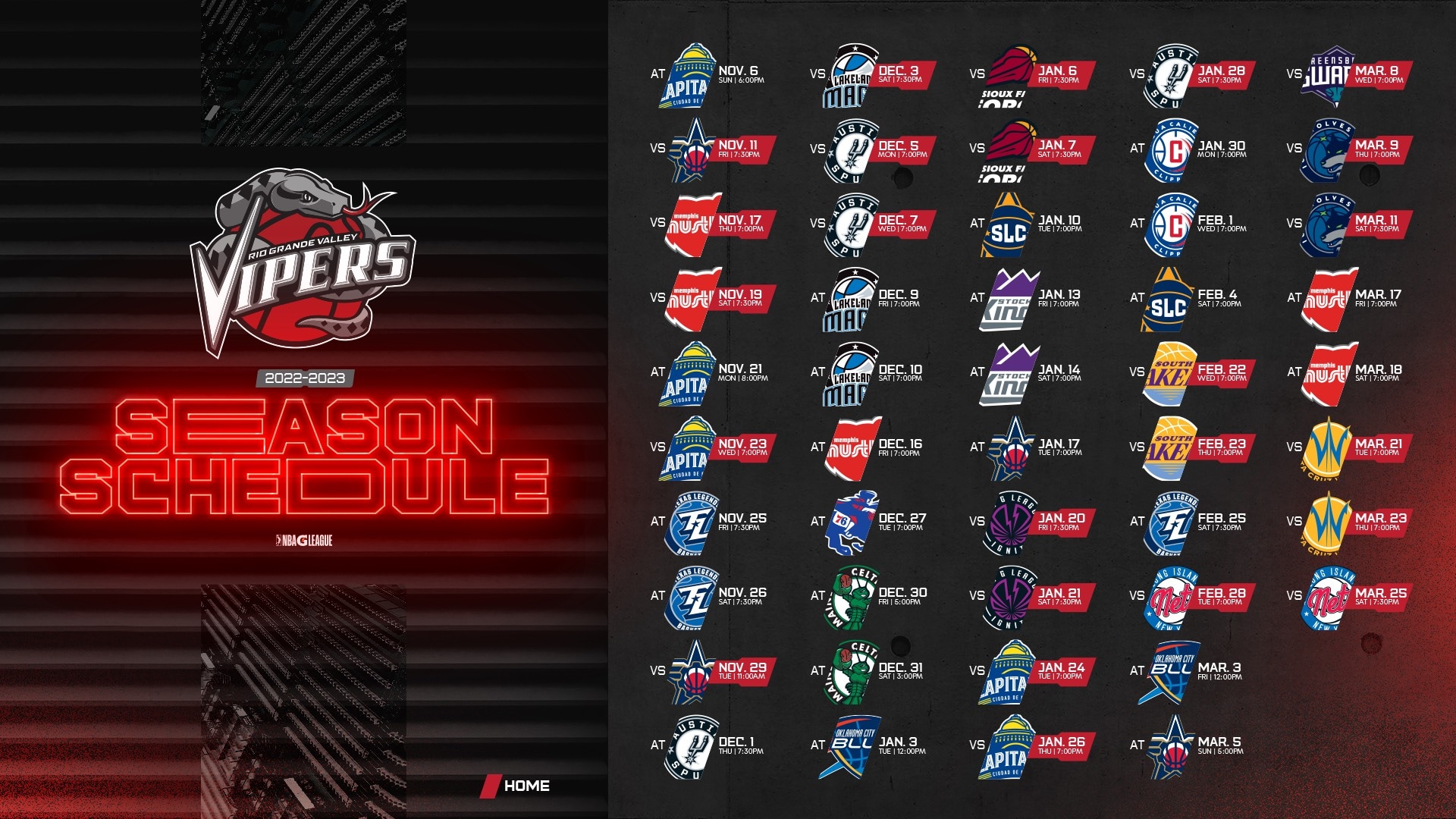 EDINBURG, Texas (Sept. 1, 2022) – The 2021-22 NBA G League Champions, the Rio Grande Valley Vipers, the NBA G League Affiliate of the Houston Rockets, announced today its 2022-23 season schedule as the team looks to defend its title. This year’s schedule features a total of 50 games, including 24 home games at Bert Ogden Arena, 24 games on the road and two games at the NBA G League Showcase.

The Vipers will open the 2022-23 season on the road on Nov. 6th against the Mexico City Capitanes, who will be joining the G League throughout the full season. Then, the Vipers will host the Birmingham Squadron for the home opener at Bert Ogden Arena on Friday, Nov. 11. This season’s home opener will consist of a ring ceremony to embrace the 2021-22 NBA G League Champions. The Vipers will be presented with their championship ring, while also witnessing the unveiling of the fourth championship banner and a neon themed jersey to commemorate the team’s neon campaign.

In a matchup between the Vipers and Memphis Hustle on Nov. 19 Marvel Fans will witness the unveiling of a custom-made Marvel themed jersey during Marvel Night. The theme nights continue on Nov. 23 when the Vipers host Mexico City for Bad Bunny Night. The night will be a tribute to the Puerto Rican rapper and singer who recently became the 2022 VMAS Artist of Year. The annual Kids Day Game will take place on Nov. 29 at 11 a.m. versus the Squadron. This day rewards students, in elementary through high school, through the team’s Perfect Attendance and Honor Roll programs.

For the first time ever, the Vipers welcome the Lakeland Magic to the Bert Ogden Arena on Dec. 3rd for Faith and Family night. Fans will get into the Christmas spirit on Dec. 7 as the Vipers take on the Spurs for an Ugly Sweater themed night. On this night, RGV will debut an ugly sweater themed jersey.

On Dec. 27, the defending champions will travel to Delaware in a rematch of last season’s NBA G League Championship Finals. The theme nights continue on Jan. 7 against Sioux Falls in a Points for Pets theme night. Fans will have the opportunity to receive a toy for their furry friends.

This season, the G League Ignite will make its debut as full participants in the G League. In a back-to-back showdown, the Vipers will host Ignite on Jan 20th and 21st. This game will also highlight the culture of the Rio Grande Valley through a custom made RGV jersey and themed night. Mexico returns to the Valley on Jan. 26 for a Star Wars themed night. To honor the youth of the RGV, the team will host a Youth Basketball Night on Jan. 28 against Texas rivals, the Spurs.

Another first will occur on March 8 as RGV hosts the Greensboro Swarm, for the first time ever, at Bert Ogden Arena. On March 9th and 11th the Vipers will host a Destination Night and Munch Madness, respectively, as the team takes on the Iowa Wolves. The Vipers will celebrate its affiliate team, the Houston Rockets, on March 23rd during Affiliate night, while hosting the Santa Cruz Warriors.

The Vipers will host 14 weekday games and 10 weekend games; a total of three Friday games and seven Saturday games at 7:30 p.m. There will be one Monday game, four Tuesday games, four Wednesday games and five Thursday games with a 7 p.m. tip-off time at Bert Ogden Arena.

Season Tickets for the 2022-23 season are now on sale. For more information on Season Tickets and to view the complete season schedule visit www.rgvipers.com.