After being away for 604 days, the Vipers open the season at home on Friday, November 5 as they host Austin Spurs, NBA Spurs affiliate, at 7:30 p.m. CST. In celebration of returning back home to the RGV, the Vipers will be giving away a special item to fans.

“We are excited and look forward to welcoming the Rio Grande Valley fans back to Bert Ogden Arena in November,” said Rene Borrego, Vipers CEO. “We can’t wait to bring back high-quality entertainment with high caliber talent for our fans to enjoy.”

On Saturday, November 20 and Monday, November 22, RGV will be hosting the Capitanes de la Ciudad de Mexico in their inaugural season at home. The Vipers will also welcome for the first time the Birmingham Squadron, NBA New Orleans Pelicans affiliate, on Black Friday, November 26.

RGV will head into the 2022 new year in a six-game road trip, starting out at Iowa Wolves on New Year’s Day. February will be the longest the team will be on the road with eight games in seven different cities – Salt Lake City, Santa Cruz, Stockton, Austin, Birmingham, Sioux Falls and Dallas.

The Vipers will end their 15 th campaign on Saturday, April 2 nd as they host Agua Caliente Clippers. In addition, RGV will host their annual All-Star game where the best of the best local high school talent compete in a West vs East match.

Teams will be separated into four regional pods where they play 12 games against each other in their respective G League markets. The teams with the best winning-percentage in each regional pod, including the four teams with the next best win-percentage across the league, will go on to play for the Showcase Cup in a single-elimination tournament at the NBA G League Winter Showcase between Dec. 19-22. The winners and runners-up will compete for a trophy and a monetary prize pool.

Those who don’t qualify to compete for the Showcase Cup Championship will each play an additional two games each at the Winter Showcase outside of the tournament format.

The second half of the G League season begins on December 27th, and features a traditional 36 regular-season schedule. The Vipers will host 18 home games and 18 road games. Each team will play a total of 50 games in the 2021-22 season.

In addition, six games will be hosted in November, three in December, six games in January, two in February, eight games in March and one lone game to cap off the season in April. All tip-off times are set at 7:30 p.m., except the only Sunday game is set at 6 p.m.

The health and safety of our fans remains our top priority and we will continue to work with the NBA, local public health experts on protocols to keep RGV fans, players and personnel safe and healthy.

RGV will announce the promotional giveaways and theme nights, at a later date.

Vipers season memberships for the 2021-22 season are now available for purchase at 956-56-ARENA. The complete season schedule can be found at www.rgvipers.com . 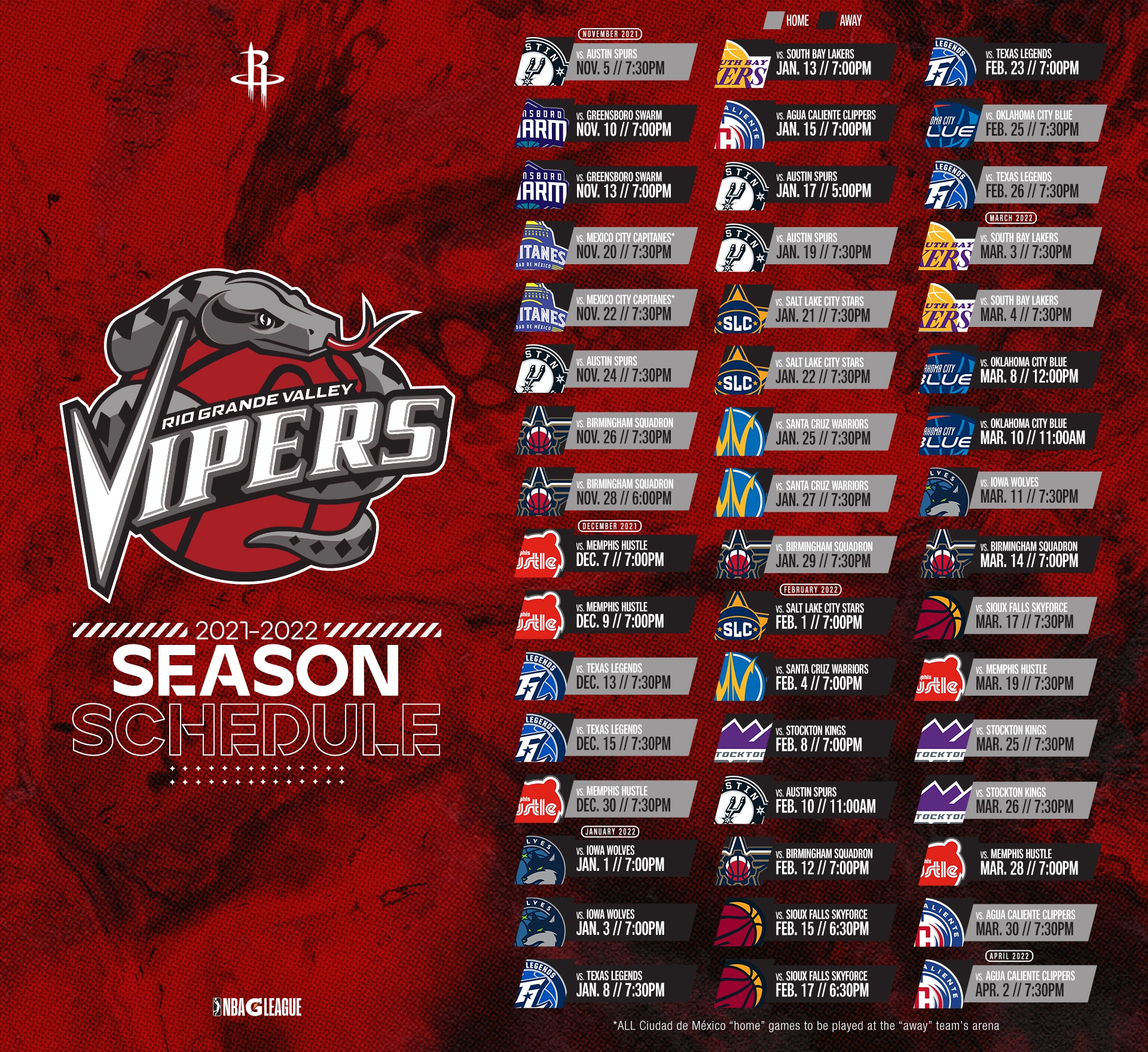